The last morning of my trip covering the Hobie Bass Open, Kayak Angler contributor Chris Funk and I hit the water again before I had to fly out and he had to drive seven hours back home. Within 50 feet from the boat we broke out the fly rods again and started catching fish, much bigger than the ones being caught in the tournament, in the same exact holes.

Funk kept saying, “Apparently I was using the wrong rod in the tournament, I think I have the same length of fish I had each day of the tournament!” The differenc was, this was only 15 minutes into the day. The bass bite continued throughout the morning, but we also caught beautiful pumpkinseed bream with colors so vibrant we had to stop to take photos. 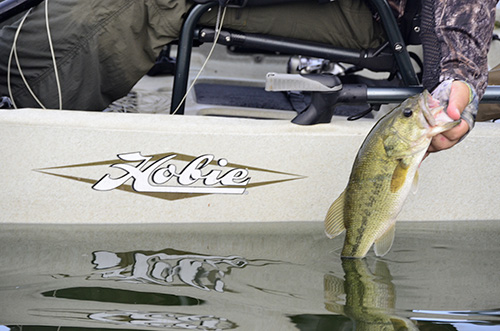 That was the main problem of the day: get two kayak fishing photographers together and all we’ll do is look for cool shots to take instead of fishing. (Funk is a much better photographer than I am, hence why his shot is our current cover photo. Look for shots of this trip to appear in an upcoming issue of Kayak Angler). We explored backwater sloughs for largemouth on the fly and had a blast taking photos of the tight, tricky environments.

Hobie’s Mirage Pro Angler 14 is a killer boat for jumping around with a camera to get those tricky angles. I was able to sit cross legged very close to the bow, lean way over the water, spin around completely and stand for hours with confidence. In those tight backwaters the boat perfomed better than I expected it. After seeing the offshore guys drool over these boats, it was interesting to see them in the exact opposite setting. 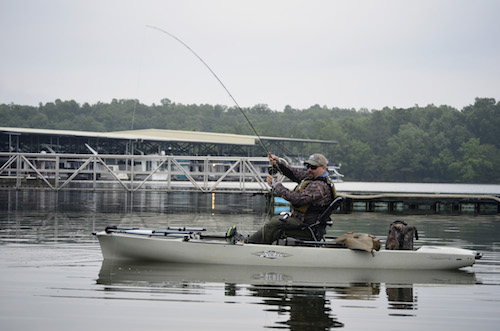 I’ll admit, sometimes the Mirage Drive would hang up on a submerged tree, but it was easy to remove the pedals and store them out of the way and just paddle through the thick stuff. It made up for it when trying to cast a fly rod with low, overhanging trees with only a few feet for my backcast. I was able to kneel towards the bow, get closer to my target and present a fly without getting hung up.

Never assume a boat is only good for one type of water. These big boats can fit into a lot less water than you think and have their moments when they absolutely shine. I honestly don’t think I could have casted in those backwater sloughs without a super stable, comfortably wide platform like the Mirage Pro Angler 14 to crawl all over and find the best casting position. 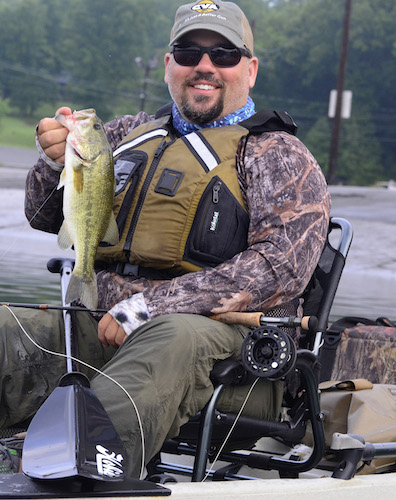 Ben Duchesney can’t help but do things the hard way, but it turns out Chris Funk is the same way. Duchesney convinced the river–running, Alabama boy to head up to the flats of Cape Cod, MA for striped bass on the fly in the near future. Stay tuned for that trip, as Funk will probably shoot some photos that will leave us all drooling.

For more information about Hobie Fishing, or their Mirage Pro Angler 12, check out their website, hobiefishing.com.

Want more from Ben Duchesney’s trip down to Kentucky Lake, KY? Click here to read the full recap of the Hobie Bass Open.

Lake Ouachita has all your striped bass fishing needs