A few years ago Wilderness Systems sent me north to Salem, MA to rep at the NEKF Striper Shootout.

Well if I’m going to rep, I’m going to fish it too. Honestly I had no Idea what I was doing but after speaking with Mike Baker, who I was also fishing with as a potential add to the Pro-Staff, said drag a tube and you will catch fish. I did and sure enough I caught a ton of fish, but just not anything big. I wasn’t disappointed and I also added Mike the the staff that first year. He runs a guide service in Maine called Kayak Fish New England and is a hardcore striper fisherman.

3 years later and I have quite a few big fish under my belt and I’m not green on salt any longer. I headed to the 12 annual NEKF shootout with big fish on my mind. Arriving around 5:30 on Wednesday to prefish, I headed over to Al’s Tackle in Beverly to meet up with the owner Steve. He informed me before I left home that there was an eel shortage and if possible grab some on the way up and I did. After hanging out with Steve for awhile I came up with a plan for the night. I headed out around 9:30 to do a little eel trolling.

I fished for hours without a sniff and then the tide started to drop, and the bite turned on. I only took 4 eels with me because I was prefishing and still wanted bait for the tournament if a shipment didn’t show up. Those 4 eels were gone in minutes and the fish were right where I thought they would be. I didn’t get any huge fish but they were at least keeper size. At 3:00 AM I decided to go get some sleep.

The next day I grabbed some sea worms and hit the river to kill some time and wasn’t disappointed. I was using the Torqeedo Helix on my ATAK to troll a tube and while doing so, toss a swim bait at the same time. I was getting double hook ups and could hardly get a bait in the water. I fished 2 hours, boated 30+ fish with 2 keepers. Not a bad afternoon at all.

Mike Baker showed up that night. “So where should we fish?”, he asked. We went back and forth on 2 spots and finally flipped a coin. Off we went hitting the water a little after sunset. We were headed out and spotted some nervous water. Bunker! I only had one snagging hook and only Mike had a rod suitable for throwing it, so I handed it over and he got one right away.

We quickly chunked it up and it wasn’t long before Mike had a fish on. Mike just broke his personal record with out any doubt and we got a 48” inch tape on the fish and had several inched to go, but before we could measure it the fish grip just couldn’t handle the weight and let go. The fish went at least 52-53” if not longer. Mike was upset that we didn’t get a measurement, but it was obvious it was his personal record and the tournament hadn’t started yet so it didn’t count.

Mike decided to see if he could get some more bunker and he headed out. I dropped my lines, put my clicker on and set my phone alarm for 20 minutes and got some sleep on the kayak. In about ½ hour Mike returned with 3 more bunker. I put a big head on my hook and it wasn’t long until I felt a fish checking it out. I came back about 10 times and finally picked it up and after feeding it about 4’ of line, I set the drag and set the hook. I was using my Truth SG and though I have already caught a bunch of fish on it, nothing huge. That fish took off like a train and took a bunch of line with it. I learned last year after breaking a fish off on 50# not to horse them. She ran for the rocks and for a second wrapped around something. I gave her slack and felt pull once again. I finally got her to the kayak and she was huge!

It takes a few seconds to register a fish that big. I put her on my grips and let her and me rest for a few seconds. A big fish expends 90% of it’s energy in a fight like that and most just roll right over when you put them on the grips. After dragging her for a few minutes we got a measurement and some pictures and after a little more dragging her along side she slapped my kayak with her tail to let me know she was ready to go home. It puts a smile on my face watching a big fish kick and fade back down into the dark water. 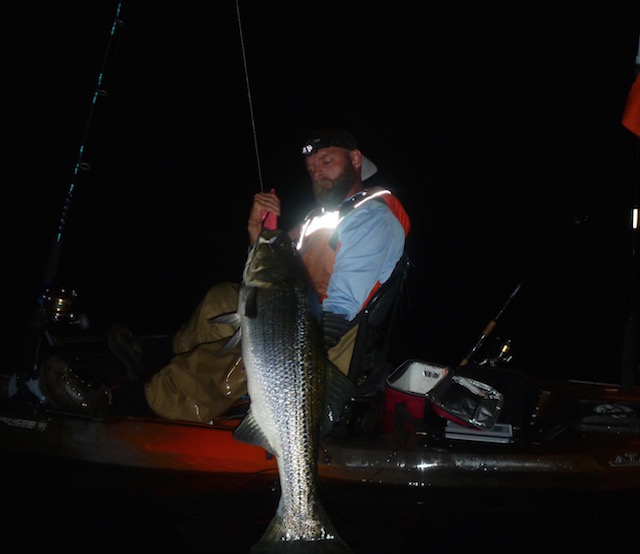 After one of the best night Mike and I have had fishing together and both upgrading to new personal best we were done. We usually don’t sleep much during the NEKF but this year I got a hotel room and informed the staff that we fish all night and sleep all day so don’t wake us up. That afternoon as we were drinking coffee and rigging, the housekeeper came by and apologized for the noise. I said I didn’t hear anything and she informed me they cut down 5 trees.

I repped Friday afternoon waiting for registration and shortly after dark headed to meet up with Mike again. He picked up some bait, because after I searched for bunker for over an hour, we at least had a few eels and some herring. It started out slow and Mike kept catching squid on the herring. I told him to put a squid on and it wasn’t long before his line took off. He got one around 40” and I grabbed a squid and put it on. Then I hooked into a 39”. It was a good night with pretty constant action. Around 4am I broke off on a fish on 50# braid and that was it for the bite. We weren’t disappointed but knew we would have to do better if either of us were going to win it.

Night 4 and Mike headed to the spot early. I relaxed until dark and headed to the dock to see if I could get a bunch of squid. First 2 cast I had a squid and thought this is going to be easy. It got tougher quick and I only ended up with 6, but knew that we could also catch then at the spot. I got there late and crept up on Mike pretending to be one of the spot burners we had dealt with all weekend. Little did I know that he had been fighting a fish for 5 minutes and had just landed a 46.5” striper. I dropped a squid and it pretty much immediately got ripped off the hook. Dropped another one and the same thing. I felt the tug of a big fish and then pulled up an empty hook. This night is going to be awesome. And then nothing. I sat on that kayak for 6 hours with nothing more than crabs chewing up my bait. Not the way I wanted to end it, but Thursday night was worth it.

I headed back to the launch around 5am to get a few hours of sleep before repping at the awards BBQ. Turns out that Mike got first place on the open class and fellow Wildy staffer Drew Haerer got 3rd in the fly division. I had an amazing time once again, got to hang out with old friends, and caught some beast. And the Make a Wish Foundation got a great donation!