The idea for this adventure hatched years ago while I was attending Lake Superior State University in Sault Ste. Marie, Michigan. Just across the St. Mary’s River, in Sault Ste. Marie, Ontario, the Canadian Shield, with its rugged landscape, extensive rivers and vast wilderness, beckoned cost-conscious college students to explore the endless hiking and fishing in the region’s parks.

Instead of driving along Highway 17, my friends and I would board a train in Sault Ste. Marie. Then, we would arrange for the train to drop us off at a lake or river along its route.

Our group would study a detailed paper map and find a remote spot in the wilderness with a fishy-looking lake or river intersecting the train tracks. Then we could schedule the train to drop us off at the spot and arrange to be picked up days later. It was an affordable way to access pristine, super-remote wilderness far from civilization.

Since my college days, I have dreamed about repeating the adventure. I would get only casual interest from other anglers until I mentioned it to Chris St. Pierre, a fellow Wilderness Systems team member. Last year we made it happen.

Like any serious, multi-day fishing trip, planning was half the fun. The section of the railway we planned to explore passed hundreds of lakes. How would we choose a lake to call home for a week?

Kayaks
Wilderness Systems ATAK 120 and ATAK 140 is stable with high volume. The high-low seat is comfortable
for long hours in the saddle.
A paddle kayak is more reliable than a pedal boat on remote expeditions.

Finding a smallmouth lake in northern Ontario is like sweeping a beach with a metal detector looking for lost treasure; I was searching for something that doesn’t exist naturally.

Smallmouth bass are found all over Ontario, but in the vast wilderness of the Arctic watershed, the fish become a rare treasure. It’s not entirely known how the smallies got into some of the lakes. I called local floatplane pilots. They shared a theory that train operators had introduced smallmouth bass and yellow perch into various lakes along the tracks. For two hardcore smallmouth anglers, finding a wild, pristine body of water in northern Ontario with quality smallmouth bass fishing would be the ultimate reward.

St. Pierre and I wanted to find a Goldilocks lake. Not too small to fish the entire lake in a day, but not too big to explore end-to-end. We used Google Earth to examine shoreline structure and depth. After weeks of discussion, we decided on a 4000-acre lake.

With a little detective work, we were able to determine the exact mile marker along the track. That’s right, even though Canada uses the metric system, the Canadian National Railway is measured in miles.

Without knowing what to expect at a completely new lake, St. Pierre and I weren’t exactly sure what lures or techniques would be best. Between the two of us, we brought lures to cover the entire water column.  We delegated tackle to ensure we would have everything we need.

Although St. Pierre and I were going into uncharted water, we packed smallmouth lures we use at home. I figured bass are bass, how different could their tastes be?

The journey started with a 12-hour road-trip from my home in southeast Michigan. The long drive gave St. Pierre and I plenty of time to daydream about the fishing ahead and discuss what lure we would throw first.

As we crossed the border and continued north, the landscape turned rugged and pristine. The hilly miles are covered in poplar and jack pine forests with large outcroppings of granite. Wild rivers snake through the land on their way to Lake Superior. Just before we reached the train, we passed a large sign indicating the beginning of the Arctic Watershed, from this point, all streams flow north. “We’re not in Kansas, anymore,” I thought to myself.

We arrived in Foleyet, Ontario in the middle of the day and several hours before our evening train would arrive. The train station is a small structure with a bathroom and pay phone. The little town had a general store and gas station for last minute supplies.

We chose to leave from Foleyet because it is surrounded by the type of wilderness we were looking for, so there would be numerous back-up options if something happened and we were unable to get on the train.

As we sat waiting for the train, I felt the gravity of the next step. We were leaving civilization and our loved ones. Sure, I was excited for the fishing and adventure ahead, but there was a little voice of anxiety in the back of my mind. I began to question our planning and preparation. Would we have enough food? Will the fish bite? Did I bring the right lures? What if there are no smallmouth in the lake?

[Also Read: The Best Tactic For Winter Smallmouth Is Not What You Think]

Our kayaks were staged near the side of the tracks, ready to be loaded when I heard the telltale sign of a large locomotive. The train pulled into the station right on time. A couple Via Rail workers hopped out of the luggage car and helped us lift our fully loaded kayaks onto the train.

In less than 10 minutes, we were on the train and sitting in our seats. After so much anticipation, the train ride seemed short. Close to midnight, and still dark as pitch, the train began to slow and eventually came to a complete stop. We put on our headlamps and carefully unloaded the heavy kayaks.

A few minutes later, the train lurched forward, built-up speed and continued down the tracks leaving us in darkness and silence. We made it.

With a few hours until sunrise, we spread out our sleeping bags next to the tracks and tried to sleep.

The next morning, St. Pierre and I made the final leg of the trip. With the sun rising, we launched our kayaks and began to look for a campsite. The advantage of traveling by train is we only had to paddle our gear a few miles to be completely out of touch with civilization.

Chris was anxious to find a site, but I couldn’t help making a couple of casts. On my fifth cast, a beautiful bronze smallmouth hit like the locomotive we rode in on. As the fish launched into the air, the weight was lifted off my shoulders. Yes, there are smallmouth in this lake.
After paddling for an hour, we found an island with a perfect mix of a gentle-sloping granite outcropping and sparse jack pine trees. We surveyed the island, unpacked the kayaks, set up our tents. Our flag was planted.  After days and miles of traveling, this island was our new home.

Once we set up camp and settled in, it was time to turn my attention to fishing. The water was clear, with a slight tannic tint. When the sun was high and bright, visibility was eight to nine feet.

[Also Read:How To Catch Winter Smallmouth On The Fly]

The lake’s shoreline and structure were designed by an angler architect. In some places, the shoreline was steep with massive granite walls dropping deep into the water. Other parts of the lake were crisscrossed with fallen cedar trees. Boulders dotted the shore. We found shallow bays filled with fields of reeds and lily pads. Offshore, the lake featured thick, subsurface cabbage beds that dropped 40 feet.

To cover water and get a feel for the fish’s attitude, I started trading between a spinnerbait and a jerkbait. Chris led off with his smallmouth confidence bait—a shaky-head jig. We each landed several nice fish the first day.

Fishing the rest of the week was outstanding. We each landed trophy smallmouth over five pounds. For the most part, we focused our efforts on fishing near-shore structure. It seemed like everywhere we found structure we also found fish.

The most fun was targeting northern smallmouth with topwater lures. I felt sheer joy watching a smallmouth bass slam my Whopper Plopper or weedless frog. After developing a pattern over a few days, I found I had the most success on finesse jigs.

We would see schools of small fingerling perch just about everywhere on the lake. A tan and pale green jig was a dead ringer. One fish I caught coughed-up a perch, which confirmed my suspicion.

We fished 14 hours a day, until we were too tired to make another cast. I really feel there is something special about northern smallmouth bass. I know it’s a pretty subjective comparison, but they seemed to fight harder and jump more than the fish back home. Their acrobatic display is something few anglers get to see.

Maybe it has to do with the habitat—surviving in the northern-most stretch of their range makes smallies tougher. Or maybe I was affected by the surroundings. Exploring the massive lake and soaking in the wild, open expanses of trees and hills made the experience more intense.

While we paddled the lake, we came across loons in pairs with yearlings hatched that spring. The sight and sound of a loon is the quintessential Ontario experience. We also shared the water with beaver and otters. It seemed every calm bay was occupied by a beaver lodge. The otters were skittish and could easily swim faster than I could paddle. A bald eagle, perched high in a pine tree, kept a close eye on us.

The day of our last cast was sad. We broke-down camp, loaded the kayaks, said goodbye to our island home and paddled back to the train tracks. Exhausted and sunburned, we got on the train and returned to civilization.

The trip was both rewarding and challenging. Living on a rock, far from my family and friends, eating dehydrated meals for eight days is tough. But traveling to the remote wilderness by train allowed us easy access to untapped smallmouth bass fishing. With hundreds of lakes in the area, we could spend a lifetime exploring and never paddle the same water. 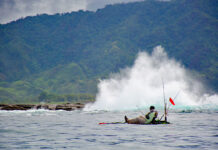 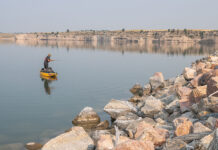 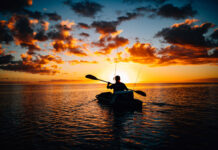