Every day, the editors at Kayak Angler receive photos from readers around the world. A steady stream of grip and grins, dawn and dusk, pimped-out kayaks and trophy catches flash across our desktops. Now we’re turning the tide. The 2016 Destination Guide captures the 25 most popular paddle-fishing hotspots on Earth, with local insight from the pros who fish there. Chances are, one of these destinations is close to you. Others are only as far away as you dare to dream or drive. —Ric Burnley

New England has a diverse fishing history and diverse fishery, but striped bass dominate the scene from spring through fall. New Hampshire guide Tim Moore is in the middle of the action. He looks for striped bass schools working bait close to shore. Diving birds or swirling fish are a good sign of impending action.

His favorite lures are soft-plastic swimbaits. “I can cast it and work it shallow or let it sink and work it vertically over deep structure,” he explains. His favorite technique is called rip and pause. “Crank fast to make the lure jump, then stop the reel to let it sink.” He warns anglers to keep a tight line, “Striper love to strike on the pause.” Moore’s favorite launch is Dodge Hill Boat Ramp in Littleton, New Hampshire. He also favors Goat Island Access, but he cautions, “It gets real muddy around low tide.”

One of the original kayak fishing tournaments, the Kayak Fishing Classic at Jamaica Bay, is still one of the largest. Marshy tidal waters flow in the shadow of New York skyscrapers, hosting trophy striped bass, grey trout, flounder and bluefish. Local guide Elias Vaisberg has won the tournament twice.

He recommends slow trolling a tube-and-worm over shallow flats for easy hook-ups. To catch big striper, Vaisberg snags a live bunker then feeds it to hungry cows below. For doormats, he bounces a 1 1/2-ounce bucktail over drops. “Blues and weakfish (grey trout) can interrupt a striper or flounder lure,” Vaisberg adds. Best launch is Floyd Bennett Field in Brooklyn. Spring is the hottest time to hit Raritan Bay. For a unique paddling experience, launch at Red Hook and paddle out to tour the Statue of Liberty by kayak. 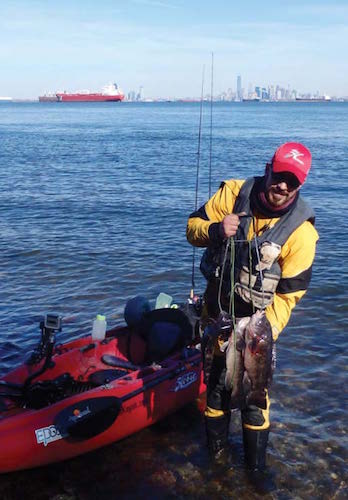