We put in at Grinder’s Ferry this morning, right after another breakfast at Ferguson’s. The four-mile float to the take out at Gilbert started with two smallmouth almost right away. The sky was cloudless and the water was just as clear, making the fish extra spooky. We could see them swimming before they were even in casting range. 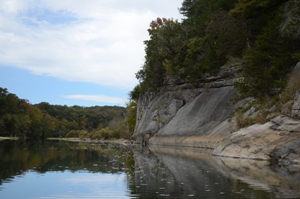 The bluffs that border the river make for breathtaking views.

I picked up a few more smallies in the same spot – the back edge of a calm pool above a small riffle. The swifter, broken water provided perfect holding water for these little bronze backs and I started catching them at each riffle, in only a few inches of water.

I also manage to stick two black bass in some warmer, slower water. Each time they were sitting right on the edge of a shady bank and they hit the green tube the second it touched the water. The day was slower than yesterday, with a grand total of 12 smallmouth and 2 black bass. The Buffalo River is like a high mountain trout stream; a handful of small, wild and beautiful fish that fight like demons is a darn good time. 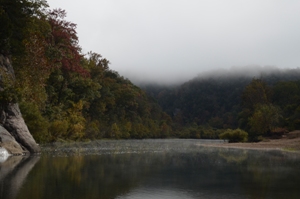 Near the river the mornings were covered in fog.

After the float we packed up and drove one hour to Gaston’s White River Resort in Lakeview, AR. Gaston’s has been around for 53 years and has been featured in numerous publications such as Field & Stream and Outside Magazine. It covers 400 acres with 2 miles of river frontage. The tailwater provides consistent water temperatures year round to grow huge rainbow and brown trout.

We went to dinner at the Gaston’s Restaurant where I enjoyed blackened chicken over bowtie pasta in an Alfredo sauce. The walls and ceilings of the restaurant were lined with antique motorcycles, typewriters, cameras, bicycles, tools and other curios. The table was set in the corner of the dining room overlooking the White River. 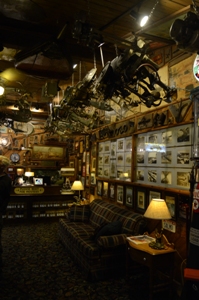 The walls of the restaurant at Gaston’s White River Resort were lined with cool antiques.

Owner Jim Gaston greeted us and gave a brief speech about the history of the resort. He said the reason the antiques are hanging on the wall is because he didn’t have the interest or the money in his twenties, when he took over the resort from his dad, for interior decorating, but he did have a large junk collection.

After dinner we took a look inside the tackle shop next door. There were mounts of giant brown, rainbow and cutthroat trout hanging on the walls, with their weights listed below. The many pictures of the more recent catches got my heart thumping faster than the apple pie moonshine could have. The fact that my room overlooks the White River makes matters worse. Hopefully I can get some sleep before dawn, but if not, I’ll take a stroll down to the river for a head start.

Join Ben Duchesney on the rest of his trip through the Ozark region of Arkansas. Hopefully tomorrow’s blog will be filled with stories of giant trout bigger than a grown man’s leg. Maybe some of the stories will even be true.