For many anglers, fishing is a mission. Preparing gear, loading the truck, strategizing a plan, launching the attack, adapting, defending, defeating and conquering another species. For these anglers, Wilderness Systems developed the new Recon 120 HD.

With paddle, pedal or motor power, the Recon 120 HD gives anglers a choice of propulsion to meet the needs of today’s battlefield. The boat comes rigged from the factory and ready to fish, or it can be armed to the teeth with accessories and electronics.

Recon 120 HD is Rigged and Ready

The Wilderness Systems Recon 120 HD fits in the category of standup, full-feature kayaks with multiple propulsion options. Compare the Recon HD with the NuCanoe Flint or the Vibe Shearwater XD.

These kayaks appeal to anglers looking to cover a lot of water and fish hard in mostly sheltered areas. They are also popular with enthusiastic beginners looking for stable kayaks that can grow with them.

Wilderness Systems has a lot of boats in the standup category. Their Radar 135 offers pedal and motor power with the Helix PD and MD systems. The ATAK has a Helix MD motor without a pedal option. So, the Recon HD gives the owner pedals with the ability to add an electric motor.

The Recon 120 is wider and more stable than the ATAK 120 or Radar 115. Also, the Recon is heavier than the other standup boats in Wildy’s line.

To win a bass tournament, serious competitors require an outboard electric motor to get to the fishing grounds and then switch to pedal and paddle to maneuver into hidden honey holes.

Currently, tournament rules are all over the board with motor requirements. Some tournaments don’t allow motors but allow pedal systems. Other tournaments allow an electric motor. To fish both sides of the fence, an angler needs a full-function pedal boat that can be motorized when the rules allow it.

On the other hand, the Recon’s 12-foot waterline and factory fishing features make the boat a great choice for entry-level anglers who are excited about exploring the limits of kayak fishing. With the Recon’s unmatched stability and reliable pedal power, new anglers get a solid platform to develop confidence and skills.

The Recon 120 HD’s design is based on Wilderness’s SMART Hull Technology. SMART stands for stability, maneuverability, acceleration, responsiveness and tracking. The designers focus their experience on balancing all elements of hull shape and cockpit layout to maximize performance.

With their latest offering, Wilderness’s experience pays off in a design that really is smart. The Recon’s wide hull is assisted by a tunnel design. The bottom of the boat has two tunnels running down either side of a central keel. The keel keeps the Recon traveling straight, even when wind and waves push the boat’s wide and high gunnels.

The outer pontoons move volume to the outside for rock solid stability and improved tracking. To improve efficiency, the tunnels let the water pass with less resistance. This design concept is common on Wilderness boats and other standup kayaks.

But the Recon takes the idea to a new level.

One of the problems of a tunnel hull is noise. Not only does a heavy boat slap its way through the waves, but water passing through the tunnels often gurgles in the scuppers.

Wilderness tackled this problem two ways. First, they curved the scuppers to reduce water boiling up through the deck. Then, the Recon’s pedal scupper is baffled with plastic bristles. These touches keep water moving smoothly across the bottom of the boat for a faster and quieter ride.

The Recon’s chine is also carefully designed for efficiency with a flared bow and stepped stern to allow the big boat to pass smoothly through the water.

Recon 120 HD is Still a Pleasure to Paddle

Considering the Recon’s 38-inch waistline and 115-pound weight, every effort has been made to improve handling. These touches help pedal and motor performance, but the design allows the big, heavy boat to paddle better than similar boats in the standup kayak category. 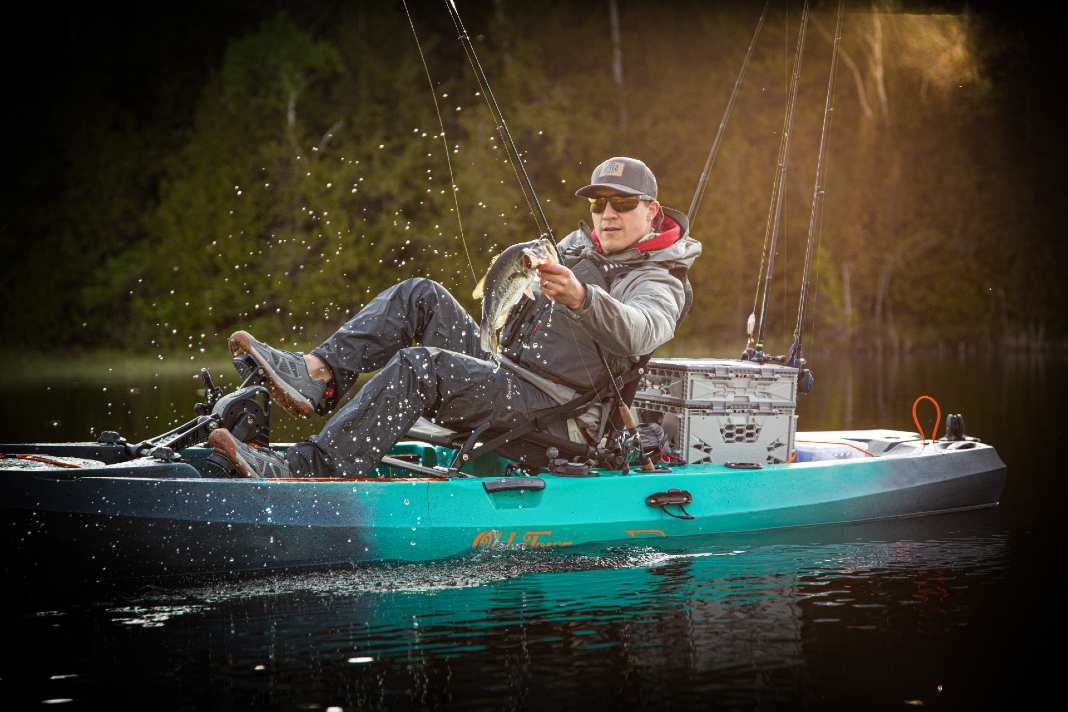 While new pedal anglers may not consider the advantages of paddling efficiency, experienced drivers know there are many times when paddling performance is a game changer.

Standup fishing requires the angler to paddle the kayak from an elevated position. Even with a trolling motor mounted in the stern, when the water is too shallow or weed-choked for a propellor, a kayak’s advantage is going super shallow with a paddle or push pole.

Maneuvering the boat through wind and current and then into boat docks and lily pad fields gives the kayak angler an advantage. The Recon hull design tames the big boat’s bullish nature for a full-feature standup kayak that handles like a smaller, lighter boat.

The topside of the Recon continues the SMART design mantra. Relying on their pro staff’s tournament experience, Wilderness incorporated favorite features from the most popular bass sleds.

Starting in the bow, a huge hatch with a deep bin and watertight lid will hold tackle trays and bags of soft plastics.

Storage is further extended in the wide-open stern. One of the cool things about Wilderness Systems kayaks is the extensive line of matching factory accessories. The stern well is specially designed to host a Wilderness Kayak Krate, a covered, sealed thermoformed gear box with four rod holders and a separate tackle tray in the lid.

Another feature tournament anglers appreciate is the Recon’s abundant horizontal rod storage. In the heat of competition, there is no time to cut one lure off and tie on another. Savvy anglers have multiple purpose-built rods with different lures ready to go. More rods can equal a better chance at offering a trophy fish its favorite meal.

The Recon HD has deep channels down each side of the cockpit capable of accommodating three rods. The channels have a padded platform to protect the reels and a short bungee to keep the rods onboard. 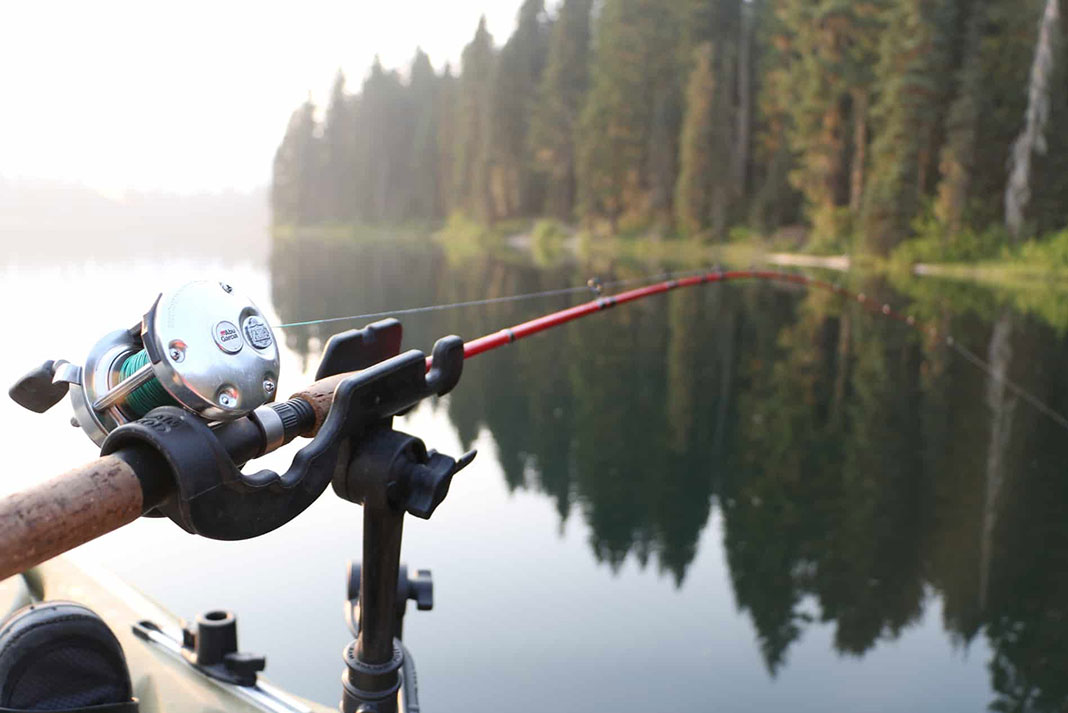 Not only do the horizontal rod holders expand storage, but they allow an angler to safely stage rods without interfering with overhanging tree limbs.

Another update to the Recon HD is the redesigned AirPro ACE seat. The breathable, padded mesh and ergonomic design are sturdy and soft.

Seat position is one of the most important considerations for pedal boaters. Getting the angle of the legs just right will ease fatigue and improve comfort.

The new AirPro seat slides on a track in the frame. To release the seat, pull a lever under the legs and it moves easily to any position. The operation is similar to a manual seat control in a car. Compared to other boats with frame seats, the AirPro ACE is one of the easiest to dial in for a perfect fit.

To power the Recon HD, Wilderness installed their well-tested Helix Pedal Drive. After years on the water, Wilderness has had time to sort out the bugs for a solid and reliable pedal system.

The Helix drive is light and simple. The drive clips into a base in the kayak and connects with a heavy pin and two latches. When the kayak enters shallow water, simply kick a pedal on the base and the lower unit pops up through the hull.

To reengage the propeller, just push the head unit back down through the scupper and it clicks into place. In our tests, the Helix HD was one of the fastest pedal systems to go into zero draft mode. The trick is lining up the propellor so it passes through the pedal scupper.

The pedal system is tested to be powerful and responsive. Matched to the rudder, the Helix PD works smoothly and turning the kayak is intuitive, although the rigging could be sturdier. Once the rudder is dialed in, it is more than competent to turn the big boat.

With the Recon 120 HD, Wilderness Systems set out to design a tournament-ready pedal kayak. Instead of using their Helix MD motor drive, they give the owner the option of running a more powerful and responsive electric outboard or trolling motor. Remove the rudder and install Wilderness’ motor plate to make room for a transom-mount motor with plenty of space in the stern for a lithium-ion or lead-acid battery. A small hatch provides access to the inside of the boat to run rigging. 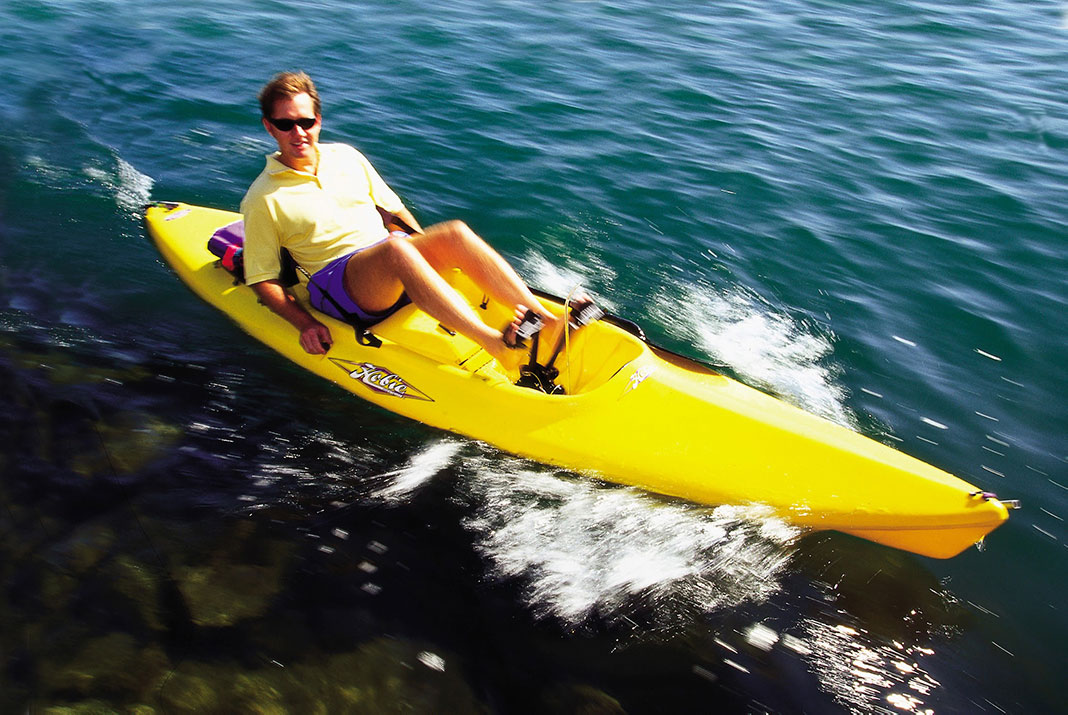 Up Your Game with the Recon 120 HD

While the Recon 120 HD is focused on standup tournament fishing, the stable and efficient design makes it a great boat for inexperienced anglers, too. Of course, at 115 pounds and 38 inches wide, the boat can be a bear to handle, but Wilderness’ SMART design tames the beast.

5 Questions To Ask Before...