Sitting at the top of the rapids, watching the water rush through the rocks, swiftly drifting towards the maelstrom, I might have been worried about the whitewater but at least I was confident in my kayak.

The first thing to look for in a river kayak is a high-performance hull. Shane Benedict, head of research and development at Native Watercraft, just released the Slayer XC, an all-around boat with river-positive features. “We pulled together a team of river anglers and started bouncing ideas,” he remembers.

Benedict explains a river kayak’s hull should have a round chine and slight rocker for shooting the rapids. “But a fishing kayak must have enough volume to carry gear and stability to allow standup fishing,” he adds.

To meet the challenge, the designers gave the Slayer XC a drop down skeg. Adding a retractable fin to the stern improves tracking on flat water. When the rapids get wild, the paddler can pull up the fin to reduce draft and increase turning performance. “The unique design is able to deal with all the variables a river fisherman faces,” Benedict explains.

While many kayaks are loaded with topside features, river anglers like to keep it simple. Wilderness Systems pro guide Juan Veruete was stoked with the new designs. “My wish list has come true,” he chuckles. Veruete has noticed more kayaks coming out with flat spaces and open areas so anglers can customize their own rig. Adding touches like electronics, anchoring systems and rod holders is up to the angler.

Veruete also looks for a higher-volume kayak to will bounce over waves and rocks. “And it should still be stable enough for me to stand and fish,” he adds, favoring a flat, unobstructed deck for casting and retrieving fly line.

Coming from a whitewater background, the designers at Jackson Kayak have produced a variety of boats aimed at a river fishing audience.

Pro angler and design consultant Drew Gregory helped Jackson get fishy. The founder of the River Bassin’ tournament series looks for a channel for his drag chain. Anchoring in a river is tricky work, so routing the drag chain through the stern of the kayak helps keep the boat from turning sideways in the current. “Plus, if I leave my chain hanging a few inches from the back of the boat, it acts as a rudder to keep me from spinning.”

Most anglers prefer a frame seat for comfort and improved visibility, but to tackle the gnarliest whitewater, Ocean Kayak pro Kevin Whitley prefers a low-profile seat and the large scuppers in the deck of his Trident 11. To improve buoyancy, he fills the tankwell with an inflatable drybag displacing water that would otherwise bog him down.

The low seat improves paddling performance and balance with less chance of breaking or losing the seat if he goes bottom-up. With the right balance of buoyancy and maneuverability, Whitley can shoot up to Class III rapids and come out fishing.

Even if river kayaks have come a long way, these die-hards still dream of the perfect swiftwater boat.

Drew Gregory is always chasing the lightest kayak, “River launches are often down steep, rocky banks, and off the beaten path, hull weight is a major factor.” While the boat must be light, it should also be tough. “The best manufactures are using high-quality materials and processes to build rotomolded kayaks that can take the abuse.

Whitewater madman Kevin Whitley would love to see a kayak designed specifically for rapids categorized at Class III and beyond. “The perfect kayak would be as effective as a whitewater boat as a fishing boat,” he says, describing a boat with a pronounced rocker, soft keel and chines and quick-draining hull. Similar sit-on-top kayaks already exist in the whitewater world, Whitley hopes more fishing-friendly designs will make the transition.

Shoot the rapids then fire off a cast. | Photo: Juan Veruete 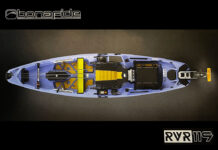 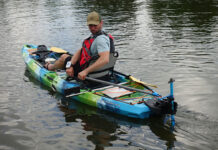