“The Biyak began a number of years ago with work on a pedal drive design,” said the designer Aaron Baldwin. “I couldn’t afford one of the existing systems, and building my own seemed easily done. Turns out that was a pretty naive assumption, but there were enough early successes to keep me trying.

My concept was based on the way that a duck swims. “Folding paddles” fold shut on the forward stroke and open on the propulsive stroke.  I had a way to link the two arms and a way to rotate each paddle to create reverse direction. The biggest trick was finding the right materials and hinge system for the folding paddles. In my shop there is a large bucket stuffed with failed prototypes. I call it “the bucket of failure.”  A few hundred trips in and out of dumpsters, a little thermoforming on my gas grill, and I finally have something that works well. I was awarded a patent on the design in the fall of 2013. 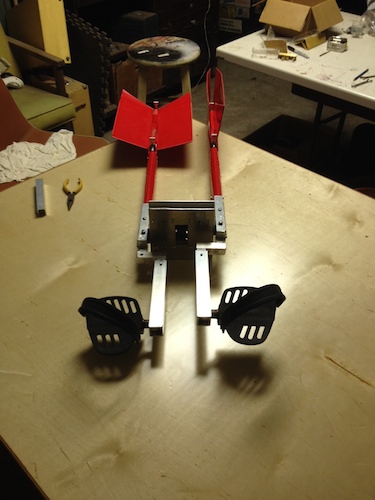 The Biyak came about because I needed something to mount the pedals to. Originally, I had stripped up some ¼” plywood and tacked them together with a brad nailer. The result was a blocky looking punt. It served its purpose, but was not an ideal form. Another designer, who was looking at the pedal drive, suggested that it would work well on a catamaran-style kayak. He was right and somewhere along the way of building a wooden catamaran it occurred to me that an adjustable beam would be easily doable. Naïve, again. 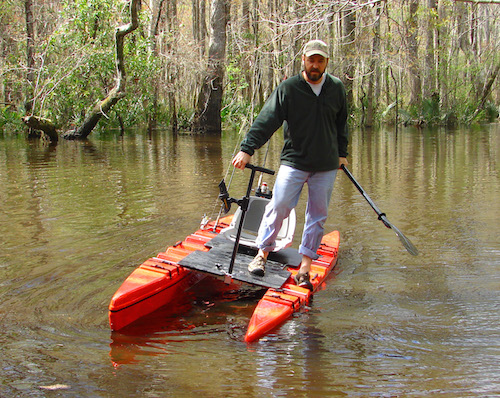 I built two wooden prototypes and one fiberglass.  In each version, I tweaked and adjusted until I was confident enough to have an ABS prototype thermoformed. I’m very pleased with the result. I have a deep love for fishing and the Biyak is an excellent fishing platform.  In its narrow configuration, the width is 30”, so it paddles well with a kayak paddle.  At its widest, it is around 46” and super stable. It breaks down into three components, each being light enough to easily car-top.

Now that I have been messing around with it, I’ve realized that for some folks the rowing set-up or the sail rig might be primary reasons for Biyaking. I think the boat is ready for production and I don’t know what I will do without having it to worry over. Fortunately, there are a lot of Biyak accessories yet to be designed. 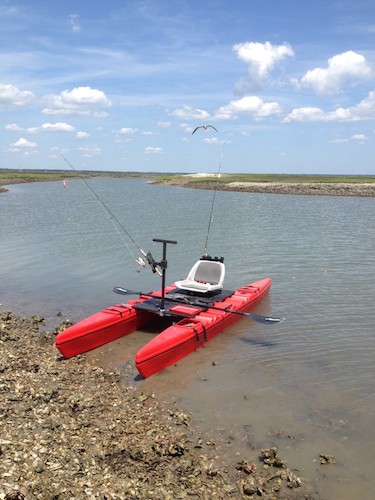 The patent pending Biyak is a catamaran-style kayak with an adjustable beam.  It is thermoformed from ABS plastic and can easily be broken down into three components and lifted for car-topping by a single person.

The patented pedal drive is based on the way that a duck swims.  “Folding paddles” fold shut on the forward stroke and open on the propulsive stroke.  Rotatable arms allow the paddle orientation to be spun 180 degrees to allow for reverse.