“Wait until you see what I got for you to paddle today,” I told Kayak Kevin Whitley over the phone. While my buddy guessed and guessed at the boat he would help me test drive, I chuckled to myself.

When I pulled into the parking lot, Whitley began dancing around and yelling, “It’s the NEXT, it’s the NEXT!” As a pro-staffer for Johnson Outdoors (Old Town’s parent company), Whitley had heard a lot about the new hybrid canoe/kayak but he had yet to paddle it. “I’ve been anxious to check this thing out,” he enthused.

Before I could get out of the truck and grab my stuff, Whitley had the boat off the trailer and was carrying it to the water.

I was excited about the NEXT, too. After a quick test drive at last summer’s Outdoor Retailer tradeshow, I wanted to know if the NEXT would fish as well as it paddled.

After Whitley took the boat for a spin and gave it his approval, I dropped my YakAttack BlackPak in the stern, loaded my rods and plopped down into the Element seat.

Like a canoe, the NEXT features an open cockpit only interrupted by a bow and stern thwart. Like a kayak, the NEXT is narrow and low enough to be paddled by a single operator with a double-blade paddle.

At only 53 pounds, the NEXT scooted across the water with ease. Low gunnels keep the angler close to the action and keep the wind from slapping the boat around. I was able to paddle the boat with a 225-centimeter paddle and fish while sitting on the seat, kneeling on the floor and even standing up.

Add a couple clamp-on rod holders and a crate and this sporty hybrid is ready to fish. Since I sit low to the water and the NEXT doesn’t have scuppers, I was able to stay dry. The sides are low enough to allow me to reach my leg over and flip a fish into the boat.

After a few weeks with the NEXT, I found myself fishing more. The boat is light enough to carry with one hand. Loading and unloading from the roof rack is a breeze. Throw the NEXT over my shoulder, grab a dry bag with some gear, my rod, paddle and PFD, and I’m portaging from one pond to another and sneaking into hidden bays.

Click here to watch the next in action on our digital desktop edition now! 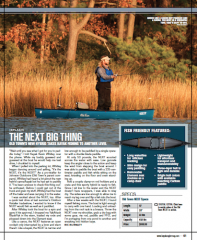 18 Of The Best Fishing Kayak Brands