The ocean is no joke. She can toss you on your head in a blink. Designing a kayak to play in the danger zone is no joke, either. That’s why Jackson Kayak called on pro guide and Kayak Fishing Show host, Jim Sammons, and legendary kayak designer Tony Lee to design the new Kraken.

In mythology, the Kraken is described as a many-legged sea monster; Jackson’s Kraken can handle many tasks and any sea conditions. A V-hull gives the boat stability in steep waves and swell. The Kraken’s hull is long and narrow to track straight and cover distance, even when the wind is blowing. It busts through the surf as well as it cuts through the current.

The design team also paid close attention to the topside. The Kraken comes rigged for offshore adventure. Standard bow, center and stern hatches provide access to the entire hull. An elevated shelf in the bow hatch will hold a 12-volt battery out of the water and out of the way, while a neoprene collar seals out splashes.

A removable, lawn-chair style seat can be moved fore and aft to adjust the kayak’s trim. The Kraken also comes with a Plano ammo-style tackle box and JKrate, and both can be bolted to YakAttack GearTracs in the tankwell. Stash the rods in the center hatch and lock down the crate and tackle box to paddle with impunity through the surf. The boat is even pre-rigged with seven GearTracs and a GoPro mount to capture all the action. Rod tubes and flushmount rod holders behind the seat prove this boat is ready for heavy trolling and heavy seas.

On a sunny day in early spring, I borrowed a blazing pink camo Kraken from Appomattox River Company (www.paddleva.com) for a paddle off Virginia Beach. Calm seas and light winds were wasted on this sea creature. The boat chews up miles and asks for more. After only a few hours in the cockpit, I felt at home with the accessories and hatches, quickly making this pre-rigged boat my own. 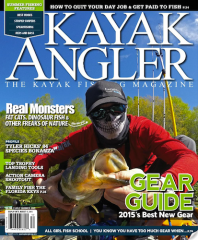