Since Hobie invented pedal kayaks 20 years ago, they’ve been running a race to stay ahead of the pack.

Each generation of the MirageDrive pedal system improved on the last to increase speed, performance and durability.

Two years ago, they added the MirageDrive 180, with a reverse gear. While the MD180 was a great improvement on the previous models, it didn’t offer instant reverse, like a propeller pedal drive.

At ICAST 2019, Hobie stole the show unveiling the unbelievable MirageDrive 360. Using a dial on the rudder control, the driver can spin the MirageDrive fins 360 degrees to go forward, backward, even sideways.

Used in conjunction with the rudder, the MD 360 allows an angler to maneuver into the tightest place or spin in circles. The fins can even operate in shallow-water mode in any direction.

Hobie solved another problem with the system, adding kick-up fins that fold out of the way if they hit an obstruction. 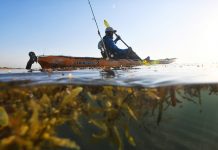 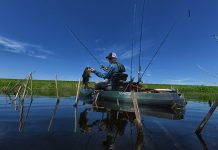 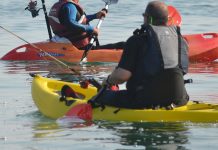 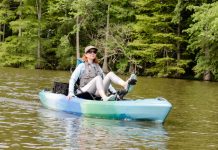 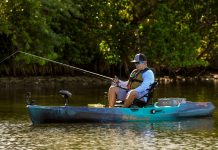