When I first saw a jig with a metal lip I thought, “No way a fish will eat this crazy thing.” Then I saw the list of tournament wins attributed to this wild looking reaction bait and added a dozen bladed jigs to my tackle box.

The bladed swimbait is the latest in-yo’-face-bite-me lure to root itself in the arsenals of many bassheads and has a no-brainer reputation for being easy to use. Yet, success with these vibrating bladed jigs calls for more than just chucking and cranking.

Last spring, a 3/8-ounce Z-Man ChatterBait Jack Hammer earned Texan Dwayne Taff a $100,000 win in the 2018 Kayak Bass Fishing National Championship. Taff says he tied on the $16 lure because “I wanted to see what the hype was about.” After cashing his big check, he could buy 6,250 Jack Hammers.

Truth is, he switched to the bladed swimbait after pre-fishing produced no keepers.

Tournament anglers call this prospecting, making hundreds of long casts to find where bass are holding.

When bass get lockjaw and Taff knows they are still in the area, he lets the bladed jig bounce along the bottom. “I let the jig sink to the bottom then pull it sharply up to give it a quick, hard vibration before letting it sink again.” The bladed jig produces a reaction bites; the flash and noise anger aggressive bass into attack mode.

The tactic saves anglers time by serving as a jig and crankbait in one. Changing the retrieve allows the angler to change tactics without changing lures. The blade makes the lure weedless and snag-resistant, too.

[ Also read: How To Fish A Chatterbait ]

Taff’s green-pumpkin colored, 3/8-ounce jig and dark green blade was paired with a Yamamoto Zako trailer. Depending on the local forage, Taff changes the trailer from a paddle tail to imitate baitfish to a twin-tail soft plastic to mimic a crayfish.

Taff says blade color can be a critical consideration. When he wants the vibration without the flash, such as early season, stained water, he will use fingernail polish or a permanent marker to add color to the metal blade.

Is Every Day A ChatterBait Day?

Chicago-based tournament basser, Dustin Murguia uses heavy bladed jigs, up to an ounce, in deep lakes. “I use a bladed jig heavy enough to stay in close contact with grass on the bottom,” he says. Murguia won two of the six contests on the Michigan Kayak Trail Tournament  in 2017 working a bladed jig along the bottom.

Murguia admits every day is not a bladed swim jig day. “My best catches come when the sky is overcast and wind roughs the water surface,” he says.

Many anglers throw bladed jigs with heavy-action baitcasters and braided line, both Taff and Murguia prefer fluorocarbon line and lighter-action rods. Fluorocarbon has more stretch than braid but less than monofilament. The light rod improves the bladed jig’s action.

“Since braid doesn’t stretch there is a danger of pulling the lure too fast without giving the bass a chance to catch it.” Murguia says. He prefers a seven-foot, medium-action rod with 15-pound fluorocarbon. “When I tear the lure out of grass, the lure pops free and slows down.” He gets many bites on the brief pause.

According to Glenn Young, national sales director for Z-Man Fishing, manufacturers of the original ChatterBaits, the lures got their name when inventor Ronny Davis and son Ron were testing prototypes back in 2003. “Ronny remarked they should call it a ChatterBait because it vibrated so hard it almost made his teeth chatter,” Young says. The Davis’ lure gained such notoriety they couldn’t keep up with orders and sold the manufacturing rights to Z-Man.

The bladed jig’s popularity continues to grow. “Although the ChatterBait is protected by multiple patents, we’ve seen a huge increase in copycats,” Young says. He also noted the lure has proven popular with redfish and calico bass. Everywhere bladed jigs hit the water they are finding success with aggressive fish. 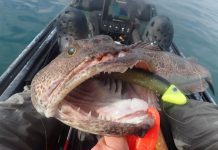 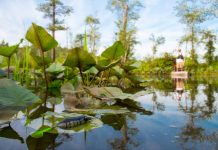 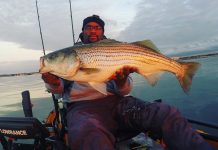 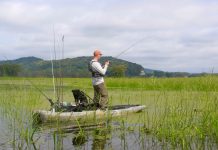