The number one obstacle to owning a kayak is transportation and storage. Okay, that’s two obstacles. But both problems are related to one thing: size. For many anglers, the solution is an inflatable kayak. Unfortunately, inflatable kayaks require time and energy to assemble, and they don’t perform as well as a hard boat. This challenge has inspired several designers to come up with unique solutions for folding and modular kayaks.

Folding Kayaks to Fit in Your Hatchback

To solve the problems of transportation and storage, while taking advantage of the performance of a hard-shell kayak, there’s a new breed of innovative boats that fold up and fit anywhere.

The folding kayak idea isn’t new. There is a wide variety of packable touring kayaks. But typically a fishing kayak needs to be larger and more stable than a touring kayak, inspiring mad scientists to come up with wild folding boats that still catch fish.

Probably the most unusual folding kayak comes from Uncharted Watercraft. Their Outbound GT and Scorpion FX can be packed into a car trunk and carried with one hand. The design works like this: Picture a clam. Separate the top and bottom of the clamshell. One shell is the bow and the other shell is the stern. A metal frame connects the halves. The angler sits on the metal frame, elevated over the water, with his feet on the front shell. The rear shell holds tackle and gear.

Greg Boston is director of sales at Uncharted. “Many people are looking for something transportable but they’re leery of an inflatable,” he says. Uncharted leaned heavy on the transportable aspect. “It’s the only boat that fits under FedEx and UPS size and weight limits for standard shipping.”

In our tests, the Outbound GT proved to be easy to assemble and transport. With the boat folded up, I could carry it like a suitcase or roll it on the included wheels. On the water, the Outbound GT was surprisingly stable and extremely maneuverable. I can paddle the kayak or drop my feet in the water and kick in circles. In addition to apartment dwellers who drive compact cars, Boston says the Outbound GT is popular with RV owners looking for paddlecraft they can pack into luggage compartments.

Another interesting take on the folding fishing kayak is the Oru Inlet. Based on origami, the art of paper folding, Oru designs boats that fold like paper airplanes and pack into suitcases. Made of panels of corrugated plastic, Orus open into rigid shells based on designs inspired by Greenland paddlers.

Creator and designer, Anton Willis says Oru’s portable concept is a direct result of living in a crowded city. “I got the idea when I moved into an apartment and I had to put my kayak in storage,” he says. After hours folding pieces of paper, he came up with the basic design that has spawned a half-dozen Oru models.

Willis says his customers span generations. Millennials love Oru because the compact design fits into their lifestyle. Older paddlers don’t want to lift full-sized kayaks onto their cars. “For anglers, there’s the added advantage of backpacking the boat into the wilderness; fish don’t always hang around the boat ramp,” he laughs.

The boat only weighs 20 pounds, but the wide hull and open cockpit make the Inlet perfect for fishing. On the water, the Oru Inlet paddles well and is easy to maneuver. The translucent panels seem cardboard thin, but the boat is pretty tough and easy to fix. Kayak Angler’s photographer Dustin Doskocil took the Inlet down the Devil’s River in Texas, famous for being a rough ride. The Inlet survived the two-day trip and allowed the paddlers to access the isolated river.

Uncharted and Oru are innovative alternatives to a traditional fishing kayak, but Swedish company Point 65 offers a full-size, rotomolded sit-on-top fishing kayak that splits in half. How’d they do it? Picture a sit-on-top fishing kayak. Then, cut the boat in half just ahead of the seat. The halves are joined with latches for a solid feel on the water. Disassembled, the Point 65 KingFisher fits in a hatchback.

Richard Ohm, founder of Point 65 says the modular kayak is the best of both worlds. “One of our primary design requirements was the boat must fit in the back of a Prius,” he says. In addition, Ohm wanted a folding boat that would perform like a traditional sit-on-top. Finally, he needed a modular design capable of expanding from a single to tandem kayak.

Ohm took the folding kayak to the next level by rigging the KingFisher with a pedal system. In our review the boat looks and feels like a traditional sit-on-top kayak. On the water, I couldn’t tell the KingFisher was modular. There is no flex or looseness in the components. The pedals push the boat confidently, but the rudder system is a little under gunned. Still, if you’re looking for a legit fishing kayak you can fit in your closet, the Kingfisher is a solid choice.

The latest addition to the folding boat trend comes from Latvia. Janis Karklitis lives in a fifth-floor apartment. “I wanted to go kayak fishing, but renting a kayak was too expensive,” he says. When he couldn’t find a kayak he could lug upstairs, he started looking for solutions. “I thought, how hard can it be to make a folding kayak.”

Four years, three designs and seven prototypes later, Karklitis and friends released the Pike modular kayak. The boat is constructed of plastic panels and frame that come apart and store in the seat base. Add shoulder straps and the seat and folded kayak turn into a backpack.

“The main idea of a folding kayak is angler comfort, easy assembly and small size,” Karklitis explains. Like the other boats in this category, Pike kayaks exceed where inflatables fall behind.

“Our goal is to remove obstacles to participation,” says Greg Boston from Uncharted. All of our experts see the sport growing and folding kayaks becoming more popular. And as Richard Ohm at Point 65 points out, “A folding kayak allows anyone to take a little adventure close to home.”

No storage, no transportation, no problem. | Feature photo: Courtesy of Point 65 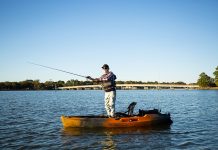 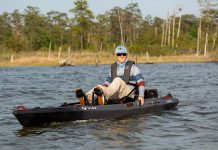 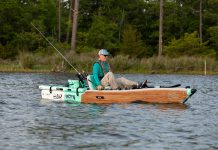