If your favorite kayak fishing spots are overcrowded with thick vegetation, Ben Duchesney has tips to help you keep your lures in the water and not in the trees.The thicker the vegetation, the better the fishing. Unfortunately, it also means you’re going to get stuck. Every smallmouth fishermen (and pike and musky and…you get the idea) says, “if you’re not getting stuck, you’re not fishing hard enough.” Ok Mr Miagi. Still, there is a lot of truth to the saying. Spend enough time fishing the thick stuff and you’re bound to lose some lures into the brush. Use these techniques to get your lures back from the wood and get them back into the water easier than ever.

If the first thing you do when your lure goes flying into the tree or bush is get angry and try to force the lure back out with strength, then it’s too late. You’re screwed. It’s very likely that you can just reel up slowly and your lure may fall out. But if you try to whip the lure back out with too much force you’re likely to wrap the line around a branch or stick, getting tangled up even worse than before.

If you’ve remained calm, but your lure is still stuck after trying to slowly reel it up over the branch, then get a closer look. It’s likely that your lure can be easily removed by just lifting it out from behind the branch it’s been wrapped around. The lure basically just fell down or into the brush, so it’s likely to come out by easily reversing the fall. Unless you’ve really hummed it in there, ace.

Another common way to get your lure unstuck is to let out more line. Yes, more line. If you’re using a lure that weighs enough, you can sometimes let out more line and lower the lure from the tree to eye level, allowing you to cut the lure off, reel up your line and simply retie. If simply reeling up doesn’t work, this is the next best option.

For some anglers, the hardest and scariest part of getting lures out of vegetation is dealing with the creepy crawlers that could be hiding inside. If you’re starting to shake in your PFD at the thought of reaching in there, flick a little water up into the bush and any spider webs will start shining from the water drops. Just go easy, you don’t want to injure the bugs. Have a heart. 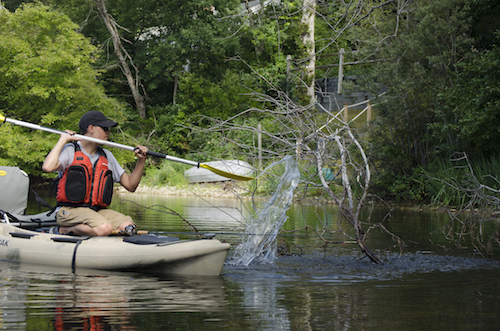 The most common reason people fall in is because they get distracted. Whether they’re trying to reach behind their seat to get something from their tankwell, or they’re looking straight above them and lose their balance, distraction is the root cause. If possible, try pulling the branch lower so you can work at eye level, instead of trying to work while looking up.

If you can’t lower the branch and have to work while looking up, make sure to stay focused and keep your head centered in your boat. If your head doesn’t go over the sides of your boat, neither will your body. Keeping hold of the branch will allow more slack in your line, making it easier to remove your lure, but it’ll also add stability while you get your lure back.

4) Use (A Little) Force, Young Padawan

If all else fails and you can’t simply lift the lure out, then it’s time to bring in the big guns, your guns. Instead of tugging at the line with your rod tip and likely breaking your line (or your rod), instead just break the branch. Unless you’re fishing in a sanctuary or near poisonous or endangered trees, breaking the tiny branch and getting your lure out while you sit down is fine. (If you’re reading this and you’re the PETA of trees, my cell phone is broken, I swear).

Your paddle is also a good backup option for when things get tricky. The hook retrieval notch on most paddles are a great way to either pull out your lure with precision or break that small branch that you can’t reach. For such a simple system, this method is surprisingly effective. 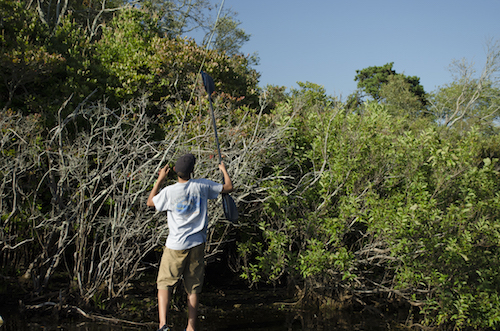 If you’ve really sent your lure flying and it lands in trees that are next to shallow water, then just get out and put your feet on some solid ground before you start flailing away at a bush. Not only will this make your life much easier, it’ll keep you much drier than falling out of your kayak. It also gives you an excuse, should your buddies be watching. No, I didn’t get my lure stuck, I swear, I’m just draining the tank near this bush.

The best crappie fishing from coast to coast

How to fish jetties for easy access to trophy fish

Guide to finding the perfect lake with beautiful scenery, big fish and no crowds