One of the most innovative do-it-all kayaks now comes in a do-it-all-smaller size. The Kaku Wahoo is now available in a 10.5 foot version with many of the same great features as the 12.5-foot model. Kevin at the Kaku Booth told us that he designed the mini ‘hoo after requests from his fans for a pint-sized version for smaller anglers and smaller places. “I was committed to making it paddle great,” he said, “even in a smaller size.” That means he reduced the rocker and added a deeper keel in the stern to maintain great tracking, one of the victims of a shorter water line. Photos of the wall of his booth showed big guys standing and fishing from the little boat promising that the 33-inch wide hull is just as stable. He added a small hatch to the bow and kept the flat, open deck and high-level seat. Somehow, he managed to make the crate well large enough to hold a full-size crate or 33-quart cooler while still leaving space for a PowerPole Micro mount in the stern 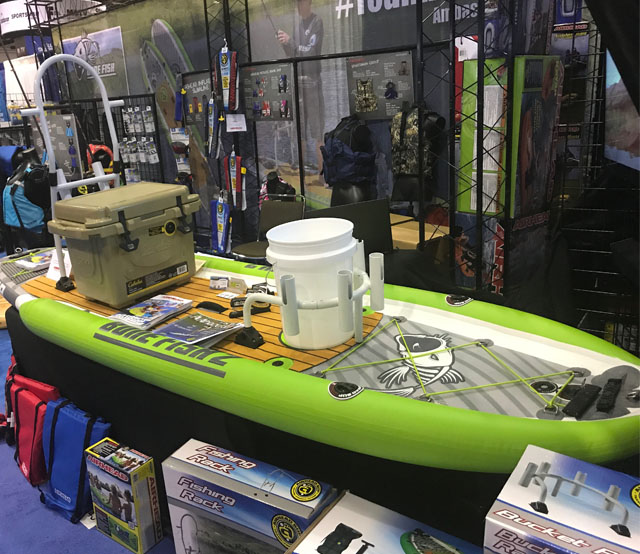 Airhead SUP is no Dummy

We recently caught wind of Airhead’s new inflatable fishing SUP and had to stop by the booth to check it out. On the floor, it looks like one of the most stable SUPs available. The new Bonefish 2 starts with a flat deck and two side chambers that improve stability and tracking. The deck is low to the water, which further increases stability. Then, they inflate the drop-stitch deck to an industry-high 21 psi for the ultimate in stiffness and stability. A pressure relief valve in the nose keeps the boat from over inflating or expanding in the sun. The board features four Scotty bases and screw-inserts and D-rings to add accessories. They offer a round rack and a leaning post that hook into the Scotty mounts. To inflate this massive SUP, they’ve introduced new electric and manual pumps. The Velocity Pump hooks to a car battery and sports a motor powerful enough to blow up any board. Their manual Mother of All Pumps has huge air chambers to push more air with less effort. 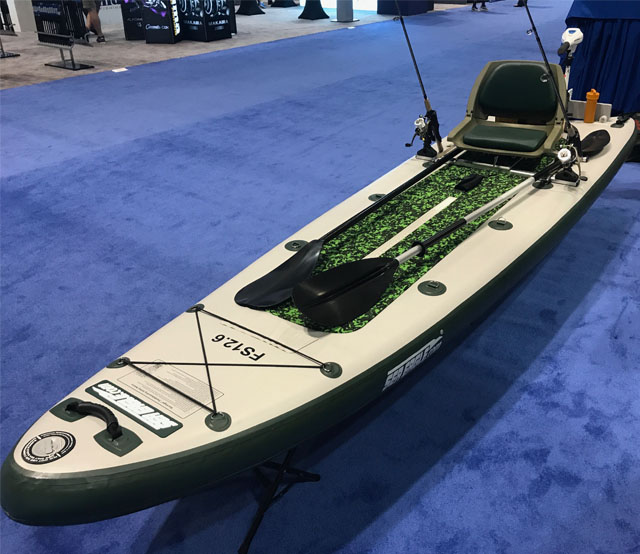 A lot of the talk at ICAST was about hybrid between a skiff and a SUP. Sea Eagle’s new FishSUP FS126 offers an inflatable entry in the category. The SUP can be paddled or powered with an electric trolling motor. The board is 12-foot, six-inches long and 40-inches wide making it a big board for big-time fishing. The drop-stitch deck is six-inches thick with a 350-pound capacity and it can take a 55-thrust-pound motor. The deck is covered with comfortable EVA nonslip foam. Eight D-rings hold accessories and tie downs with two more D-rings to hold battery box. The board and motor only cost $1299 and it comes with a bow storage bag. They’ve also added a small inflatable raft called the PackFish that can be packed in a bag and hiked into the best fishing holes. At only 21 pounds the PackFish offers room for more gear and equipment for pack-in fishing trips. That includes an inflatable seat and built in rod holders. Two external cases hold gear in reach and there’s an available hard floor that allows the angler to stand and fish. It’s like a float tube, but you don’t need waders.

They’re also working on an inflatable kayak for fishing that will have EVA foam on the gunnels and deck to make it tough and sturdy. The boat will come in a single and tandem model. 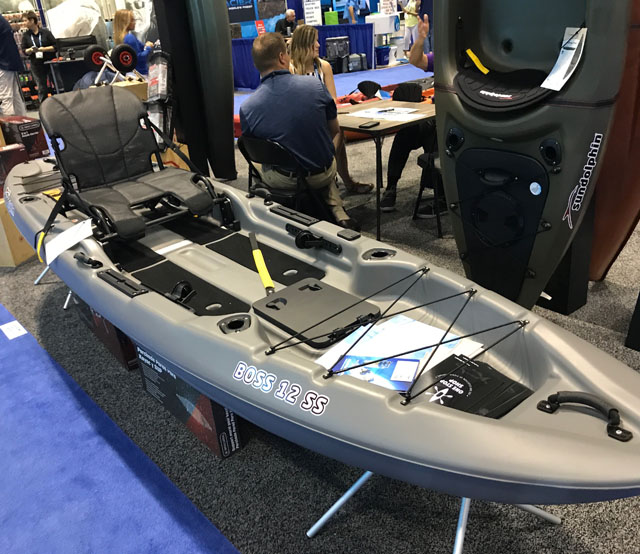 Big news in the paddlesports industry is a recent merger between Sun Dolphin and Future Beach kayaks creating a mega company that is one of the largest kayak manufactures in the business. One of their first creations is the new Boss 12 SS thermoformed kayak. They used a catamaran style hull for a flat stable fishing platform. That supports their bow to stern flat open deck with plenty of room to stand and fish and pack with gear. I like the huge bow and stern storage wells that are large enough to hold a crate or cooler. They include one swivel and four flushmount rod holders. I can’t wait to try out the comfy looking high/low seat that folds down or moves out of the way for more fishing room. This is a serious fishing kayak that costs less than $700. We also saw a new Osprey 12.9 kayak by Heritage that will have a completely flat deck, lightweight seat and bow and stern hatches. At just $799, the Osprey 12.9 comes rigged with gear tracks, foot pegs, storage spaces, gear mounts and flushmount rod holders to go from the store to the water. Look for these boats and more new designs in Winter 2018. 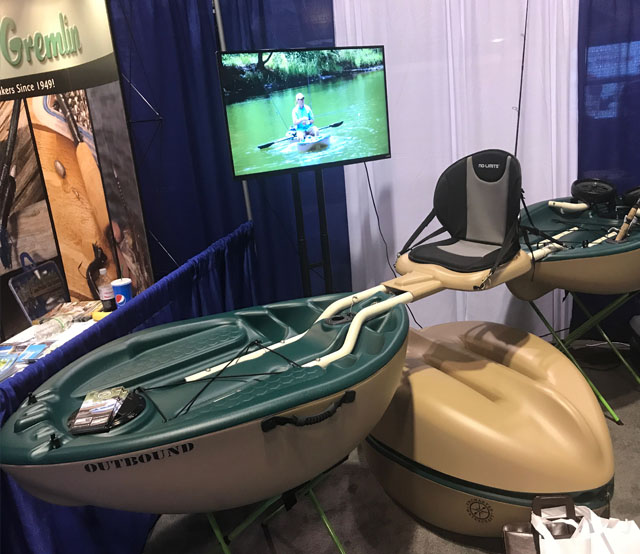 One of the most unique designs to hit the water is Uncharted Waters folding kayak. The boat consists of two pods connected with a tubular frame. The paddler sits on the tubes, his feet go in the front pod and gear goes in the rear pod. The boat breaks down and folds up into a suitcase-sized package that rolls on a pair of wheels. This is a great boat for anglers with limited storage or transportation options who want to hit sheltered waters that are hard to reach. 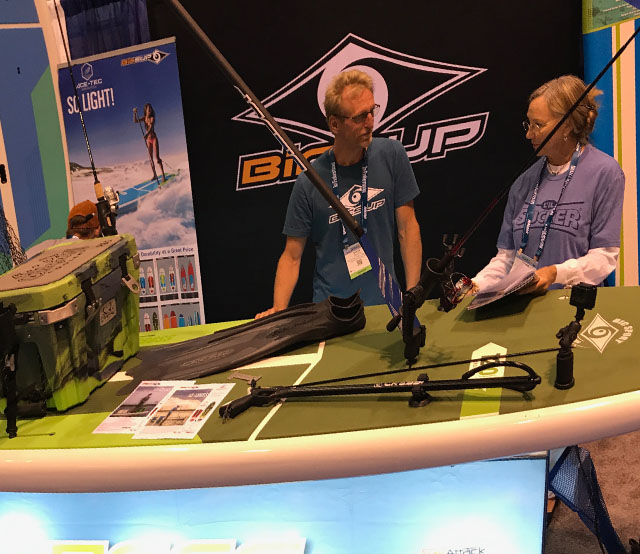 BIC hit the SUP fishing scene hard with their Cross SUP that combined a user-friendly hull with hard-core fishing potential. This year, they’re adding a 12-foot model that will provide better performance for the long haul and more capacity for gear. The Cross 12 has the same bow-to-stern padded deck and multiple leash-plugs for tie downs with a keeled bow and concave hull that balances stability and tracking. BIC uses their ACE-TEC construction combining a thermoformed skin over a foam core that is tough and light. At the show, they invited visitors to abuse a cross section of the hull. After three days of drops, kicks and slams, it still looked good. 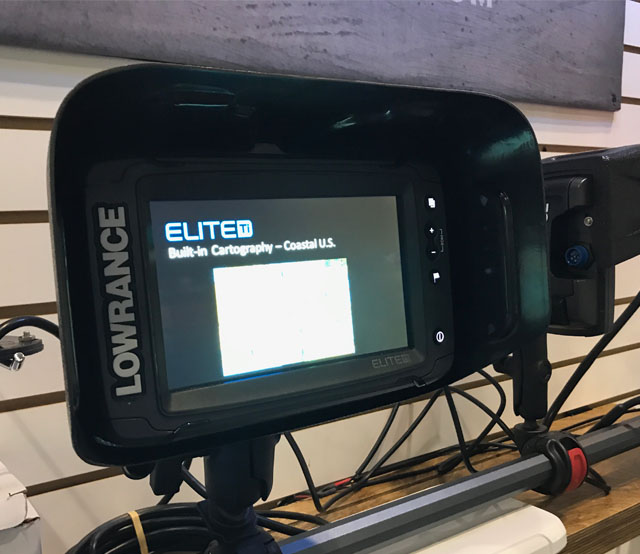 Every kayak has its problems. Berley Pro offers solutions. Their most popular gadget on boats and boards is the fish finder visor. Anyone who uses a fish finder in direct sun knows that glare can make it tough to see the display. The model-specific visor clips to the screen to cut the glare. Kayak anglers love the unit because we can reduce the screen brightness to reduce the power draw and increase battery life. They also make a transducer shield that protect larger side-imaging transducers in any make kayak. Native Watercraft owners can upgrade the rudder on their slayer models with Berley’s larger rudder. The rudder has more surface area to improve steering. They also offer an improved rotor and spectra line that is tougher than the standard

The Latest And Greatest: Best Kayak Fishing Gear From ICAST 2020

For An Introduction To Kayak Fishing Tournaments, Get Online