I didn’t fish as a kid. I grew up on a dairy farm and everybody knows dairy farmers don’t fish. Back then, I did chores before school, chores after school and wedged in between a quick ride on my BMX bike. My introduction to fishing was as unlikely as you could imagine, but everything comes full circle.

A couple of Saturdays each month, my mom would send me to town. I suppose this was her attempt to make me less feral. I would spend the afternoon with my buddies, twins, named Tim and Todd.

We would BMX around their neighborhood thinking we were the shit in a ’70s kind of way. Our rides covered several town blocks, and always ended up on a side street passing the side door of a two-car garage.

Over the door was a faded sign for Dennison Tackle.
Inside, two long work counters topped with white Formica glowed under the fluorescent lights.

[Also Read: How To Catch Winter Smallmouth On The Fly]

Tim, Todd and I would climb up on a stool, look at the “recipe” tacked above the workstation, pull the required beads and blades from organized bins, and set to work building lures.

Five cents each. Piece work. After an hour or so, we would trade in a pile of lures for cold, hard cash—sometimes as much as a dollar! Then, we rode down the highway straight to the gas station where our earnings would get us a pack of Popeye candy cigarettes and a Coke, each guzzled in short order. Life was glorious.

So, sliding beads and spinners on a hook was my first introduction to fishing. It wasn’t until many years later when I discovered another side to the sport.

During college, I had a summer job as a raft guide. Now, I thought I was the shit in an ’80s kind of way. When the Robert Redford film, A River Runs Through It, came out, I thought someone as cool as me should fly fish.

Yup, I was that guy. I didn’t know anything about the fish living in the river. I was more concerned with whipping my day-glow orange line in a perfect circle. I did not catch many fish. I was not the shit.

Since then, my misguided motivation for picking up the fly rod has turned into a lifetime passion. I’m less concerned with looking cool. Today, fly fishing is my refuge from the real world. An escape. When I’m focused on my cast, the river, matching the hatch and understanding my finned opponent, there is no room for other concerns.

My humble beginnings were lost, deep in my memory, until a couple of weeks ago. The tackle bins and bright lights of Dennison Tackle, my young fingers sliding beads and spinners onto a hook, were buried inside my head.

Not long ago, I received a bunch of fly-tying supplies in the mail. The package included beautiful rainbow-anodized tungsten beads for tying weighted nymphs. As I slid the first bead onto a size 16 hook, the floodgates opened and the memories rushed in. I was overcome with nostalgia. My bright desk light, the color of the bead, sliding the bead over the hook bend, I was whisked back 40 years.

So, full circle. An odd job for candy money is now my escape. When a kid is introduced to fishing, the seed is planted, even if it takes decades to germinate, it will produce fruit. Jeff Jackson 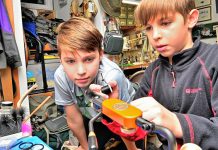 Get Your Kids To Love Fishing 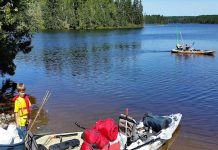 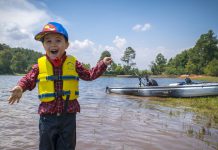 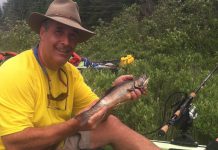