Captain Ken Daubert didn’t want to just write a book, he wanted to start a fishing revolution. The author of the 2001 book Kayakfishing: The Revolution was the first writer to introduce the world to paddle fishing.

Founding Fathers on Kayakfishing: The Revolution

“I contacted Ken and complained, ‘You’re giving away the secrets.’ We became good friends and he encouraged me to write Kayak Bass Fishing and then he wrote the book’s forward.”—Chad Hoover, founder KBF and host of Kayak Bass Fishing.

“The sport was covered in the press out west, but East Coast anglers didn’t have a source for information. Ken penned the first book on kayak fishing at the right time.”—Paul Lebowitz, editor Western Outdoor News

“Ken was kind enough to include me in the book. The book covered so many elements of kayak fishing in the early days.”—Jim Sammons, Host of The Kayak Fishing Show

“No doubt Ken was the first person on the East Coast to bring kayak fishing to the mainstream. A lot of us looked up to him. He truly started the revolution.”—Cory Routh, author of Kayak Fishing: The Complete Guide

Today, Daubert is an accomplished fishing guide, taxidermist and custom lure designer. Two decades after his groundbreaking book, he reflects on his early days, the inspiration for the book and where he sees the sport going.

“I was guiding out of a johnboat, poling through the weeds with two clients, and a guy came floating by in a kayak. Fishing the heavy vegetation looked a lot easier with a kayak.

I had a beauty of a kayak forgotten in the corner of my garage. I had almost given the boat to a friend to get it out of the way. After my first trip, I didn’t enjoy fishing out of a motorboat anymore.

Fishing is based on stealth and nothing beats the stealth factor in a kayak. The custom lures I create work best when I don’t spook the fish. So, a kayak fits the type of fishing I do.”

Why did you write Kayakfishing: The Revolution?

“The book came as a result of people checking out my website, which was among the first websites focusing on kayak fishing. I received tons of emails and messages. The number of people trying to get info about kayak fishing was overwhelming. After a while, I decided to write a book. I wanted to compile all the answers to their questions.”

Why did you call kayak fishing a revolution?

“Because that’s what it was, a kayak fishing revolution. A lot of people in the outdoors industry were talking about the sport being a fad, and they weren’t doing much with kayaks.

In those days, we were rigging our kayaks and mostly improvising. I felt the sport was going to take over. Everyone who had a johnboat would replace it with a kayak.”

Where do you see kayak fishing going in the next 20 years?

“Haha, I quit thinking about the future of kayak fishing. I like the simplicity. The sport is more complicated now. The simplicity is what lured me in. The kayak was a more accessible and more economical way to fish.

I still get out at least once a week. I am busy making lures, but if the fishing is good, I get out twice a week.” Andrew Pegman 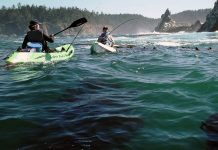