Kayak anglers from the East Coast to the West, from Florida to Hawaii are testing the waters beyond the breakers. Read their stories and learn their lessons.

Standing on the beach with my paddle in one hand and the bow handle of my kayak in the other, I watch the waves and wait for a lull in the swell. When the last breaker crashes on the bar, I drag my boat through the shorebreak and hop in the seat. Paddle, paddle, paddle, through close calls and past harrowing moments before I’m out, beyond the breakers, in the ocean. What next? Will I catch a tuna, dolphin, wahoo, shark or something else? Will I encounter whales, porpoise, sea turtles, flying fish or some other strange creature? I dig my paddle into the deep blue and head towards the empty horizon, big fish and adventure.

Local Knowledge: Andy “Iceman” Allen, co-owner of OEX Sunset Beach (www.oexsunsetbeach.com) paddle shop, says white seabass key in on squid. “Anytime the squid are around, the fish won’t be far away.” He looks for white seabass near kelp beds that border a deep canyon. Allen adds, “You can also catch them around barracuda and porpoise that are feeding on the flats.” He starts by catching live mackerel with a sabiki rig, then slow trolling the baits over structure and around kelp. Fresh squid makes a great white seabass bait, too. Yellowtail move up from Baja when the water temp hits 65 degrees Fahrenheit. To catch them, cast metal spoons, called irons, at yellowtails feeding under working birds or breezing on the surface. Between blitzes, Allen slow trolls live green backs and sardines along kelp beds and over drops and ridges.

Don’t leave home without: A fishfinder and GPS for marking bait and finding your way home in fog. Also important is a high-quality livewell with recirculating pump. “Don’t overload the livewell with baits,” Allen stresses.

Stay Safe: “A hand-powered bilge pump will save the day if you take on water while launching.”

Local Knowledge: Off Pensacola, Florida, the Gulf of Mexico is deep and clear, drawing offshore species close to the beach. Robert Long, the host of the Rblong3 YouTube channel, says offshore fishing fires up in the spring when the water temperature hits 74 degrees Fahrenheit and stays strong through late fall. Cobia show up in March followed by mahi, tuna and kings. Red snapper season opens in May followed by grouper in June. Fall is the best time to score a sailfish and flounder hang on the reefs through the winter. To cover the most ground, Long slow trolls from one reef to another with live bait, which he catches behind the second bar with a sabiki rig. When he reaches the reef, he’ll drop a vertical jig or a natural bait for snapper, grouper and flounder.

Don’t leave home without: High quality fishfinder to locate structure and bait, and GPS to mark reefs. “We find a lot of structure while trolling around,” Long says. Carry live bait in a four-foot by two-inch PVC tube drilled full of small holes and plugged with end caps.

Stay Safe: “In addition to a handheld VHF radio, I carry a personal locator beacon,” says Long. He often fishes two to three miles offshore. “I don’t carry a cellphone and VHFs aren’t reliable,” he says, “when I need help I want to be heard.”

Local Knowledge: From May until July, tuna, kings and mahi hang out on the wrecks and reefs within a couple miles of Pompano Beach. Joe Hector, director of the Extreme Kayak Fishing Tournament series, says that mahi stick around all summer and wahoo show up in August. Winter months and early spring can be best for sailfish. Bottomfish are available year-round but recreational fishing seasons are only open for short windows of time. For the pelagics, anglers slow troll live baits on wire. To catch bottomfish, they drop live or dead baits to the reefs and wrecks. “We base our strategy on the current,” Hector says, “and try to drift over as many wrecks as possible.”

Don’t leave home without: “Live bait will survive in a five-gallon bucket with a battery powered aerator,” he says.

Launch Sites: Start on 14th Street, Pompano Pier. “There’s plenty of parking and easy access right in the middle of the fishing grounds.”

Stay Safe: “Be careful,” Hector says, “these fish will fight back.” Wahoo have razor sharp teeth. Pin fish (for bait) are armed with sharp gill plates and spiny fins. And a billfish has a lethal weapon attached to its face. “They’ll cut you if you’re not paying attention.”

Local Knowledge: Mahi show up in early spring followed by yellowfin tuna and blue marlin. “On the north side of the island, the wind averages 20 knots,” Gannon says, “but on the west side there is hardly any wind.” First priority is catching live bait. He fills his livewell by marking bait on his fishfinder, then catching it with a sabiki rig. After his livewell is packed, he slow trolls over drops and ridges from 100 to over 1,000 feet of water.

Rigs: Thirty-foot topshot of 50- to 130-pound test fluorocarbon tied straight to 6/0 circle hook. For wahoo he advises adding a stinger rig to the leader with a two-foot length of 75-pound test titanium wire. For large baits, use a bridle rig.

Launch: Launch from any of the many beaches along the western shore. “The fish move from day to day,” he says. “I consider the moon, tide, currents and my personal fishing almanac to decide where to fish.”

Don’t leave home without: An anchor and 300 feet of anchor line. “Paddling back in, the last mile can be tough. I throw out the anchor and take a break.”

Stay Safe: “Know your limitations,” Gannon says, “I’ve been paddling my hardest into the current and still moving backwards.” He warns that currents and winds can quickly carry an angler far off course.

Wind on the Water

Local Knowledge: “On the coast of Texas, we get wind and more wind,” says Ty Southerland, host of the blog www.30milesout.com. The season starts in the spring when water temperatures hit the mid-70s but the wind subsides from mid-summer through October. Along the Coastal Bend, the water is deep and clear and there are many oil rigs near to shore. Southerland trolls diving plugs out to the rig, then anchors off and jigs the bottom while light lining a live bait.

Don’t leave home without: A cooler bag. Fold it up and keep it in the front hatch when not in use. Unfold and open it to hold large fish. Frozen water bottles can keep the catch cold.

Launch Sites: “We drive down the beach until we find a rig we want to fish.”

Stay Safe: Leave a float plan with a responsible person listing where you will launch and fish and when you will return.

Digital Extra: Watch Ty Southerland in action at Rapidmedia.com/0067 or check out the iPad or Android edition of Kayak Angler.

Local Knowledge: At the tip of Cape Cod, the bottom drops off and ocean currents carrying bait and bluefin tuna run close to shore. Dave Lamoureux, former world record holder for largest fish (157-pound bluefin) caught in a kayak, says the bite starts in June and the fish hang out through fall. “Mid-September through October is awesome,” he says. There is a launch at each end of the Cape Cod National Seashore and the fishing grounds are in the middle. Lamoureux plans his day to ride the current out to the fishing grounds, fish through slack tide, and then ride the opposite tide back to the launch. “Bluefin bite best at slack tide,” Lamoureux says. He trolls naked horse ballyhoo with heavy tackle, but hooking the fish is only half the battle. “Fighting and landing one of these monsters takes everything you’ve got,” Lamoureux says.

Don’t leave home without: Single-handed harpoon attached with rope to poly balls. “When the fish gets close, hit it with the harpoon and then let it tow the poly balls.”

Stay Safe: “I bring dive fins so I can swim back to the beach if I should lose my kayak,” says Lamoureux. 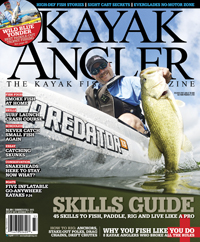