After almost twelve hours of traveling, I was happy to be Arkansas and staring out into the waters of Lake Ouichita. Late last year I was in Arkansas exploring the Ozark region, but this time, I was in the SW corner of the state. After a dinner cruise on the Lake, we borrowed a few rods and cast on the docks to three and four pound largemouth because we couldn’t wait until the next morning. 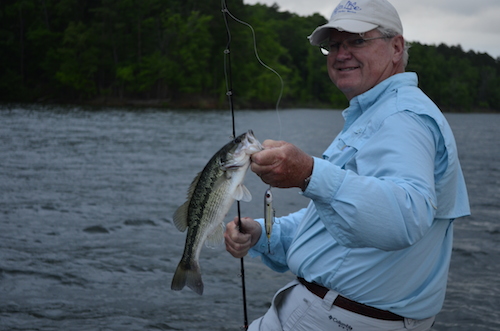 At daybreak I met up with Mike Wurm, one of the three best fishing guides in the area and a former B.A.S.S. and F.L.W. tournament angler. We started off the morning casting topwater for stripers, running to a few different points, but not finding any signs of fish. We had one follow, with two blow ups on the lure that left my knees shaking, but that was the only sign of my favoirte species for the day.

After that we hit a few different islands, one of hundreds on the lake, and cast a shakey-head jig with a rubber worm into submerged brush and caught spotted and largemouth bass. We were catching a lot of smaller fish so, after dodging a rainstorm or two, we decided to cast and troll for a shot at a walleye. 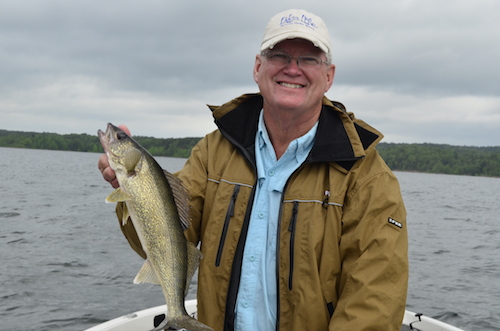 Though we were marking fish, we only managed to catch one walleye (though, it was bigger than a few others caught near us I might add). We also caught two freshwater drum, which in most places isn’t worth mentioning, but since I don’t have them in my local waters, I’m not ashamed to admit they are a lot of fun on light tackle. Even though the weather had turned from dark, scary clouds and whitecaps to mostly sunny (with much less whitecaps), we had to hit the road to fish the next lake. 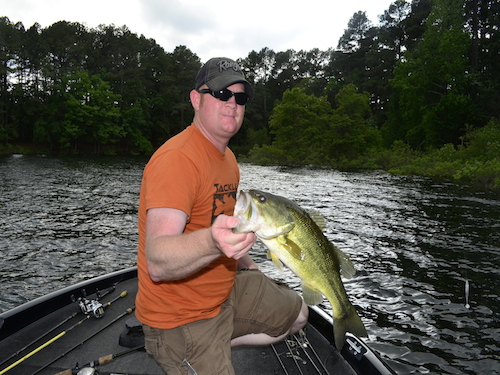 At DeGray Lake a couple hours away we met up with Josh Jeffers, the assistant coordinator of the nearby Pinnacle Mountain State Park, north of Little Rock, AR. The weather radar was calling for thunderstorms in the afternoon and the wind was strong, but we hit the water and searched for more protected coves (while keeping a close eye on a thundercloud at the other end of the lake).

We quickly started catching largemouths around 15 inches steadily and if the bite slowed we’d just move on to the next protected cove and start catching them all over again. We were catching paddletail, plastic flukes up into the flooded brush and next to submerged logs and could see the bass strike in the super-clear water. I was even driving the other guys in the boat nuts by reeling the fluke acoss the top of the water and catching topwater all afternoon. 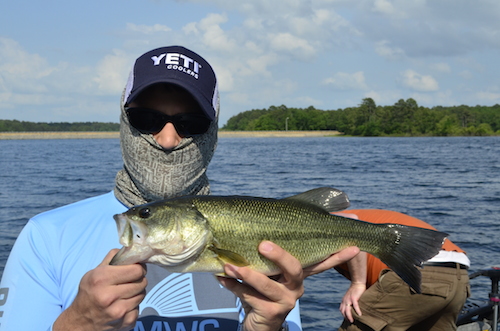 We kept fishing until the thunderclouds were right upon us. We made it back to the dock inside just as the rain hit. It didn’t last very long but it was a downpour. I had a killer “Blazing Burger,” (cheeseburger, jalepenos, pepperjack cheese, BBQ sauce, etc) at the hotel restaurant before calling it a night, listening to the thunder and lightning outside (as I write this), but hoping it’d clear by morning.

Tomorrow we head back out to fish DeGray Lake for more largemouths and may even try for giant crappie or big hybrid bass (wipers). Severe thunderstorms (and flood warnings) are threatening to keep us off the water, but may be just rain. I’ll most likely be getting soaked, either way. 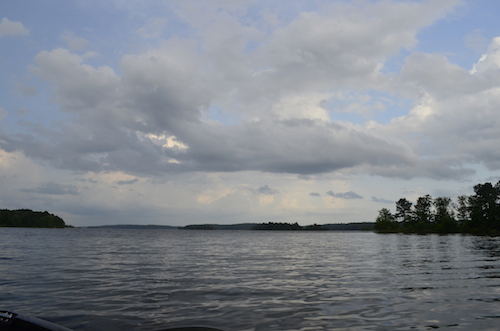 Want to read about Ben’s first trip to Arkansas? Check it out here.