Labor Day was the last weekend before the kids go off to school and I wanted to do something memorable with the boys. Anna is a teacher so she wanted to spend a lot of time getting her classroom prepared for next week which left me with an opportunity to wisk the boys off for an overnighter somewhere.

With the weater calling for nothing but sun and warm temperatures, I packed up three kayaks and all our camping gear and took the boys off for an adventure at West Branch Musquash.   This is basically a huge pond littered with islands of various size with most of them having sandy beaches.   There are cabins all around the lake,though most of them are concentrated on the Western side, so there is no trouble finding an island beach that is isloated and private. 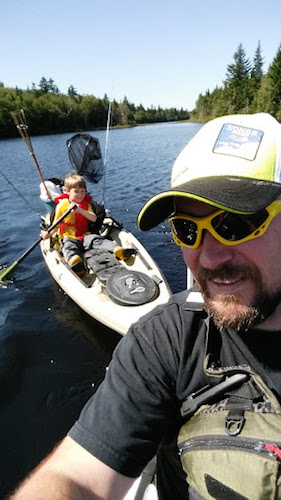 With Fynn being 8 and Rowan being 5, I would typically place Rowan on a footstool behind me on my Predator 13 and have Fynn ride the Tetra 10, but with all the camping gear I wanted to bring, I opted to give Rowan his own kayak!   Between me in the Predator 13, Fynn in a Trident 13 and Rowan in the Tetra 10, we had lots of room for gear… and used it all!

The paddle out was slow as you can imagine.    I ended up packing some mismatched paddles so Rowan was forced to use a half paddle, forcing me to tow him out.   The water was very high this weekend so many of the beaches were underwater, however after about a 2 km paddle, we found a beach that was perfect for us. 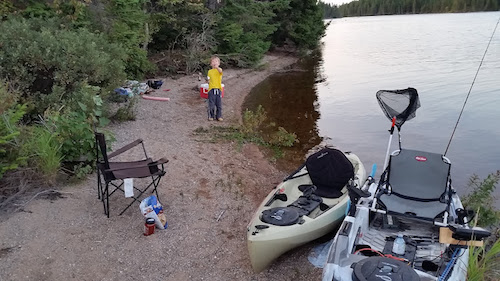 Once at the beach I began the process of unloading from all three kayaks and setting up the tent, air mattress,…etc. The boys decided they wanted to paddle out to explore a little island about 400 feet from our little beach. Rowan jumped in the back of the Trident 13 and off they went. It was great to sit on the beach, have a beer and watch them do it all on their own perfectly. Fynn paddled the kayak to the island, landed it and then pulled it in to help his brother get off. Then when they finished they did it all in reverse and paddled back.

The boys went off to explore the island. They found a few paths and eventually a meadow people had been using for camping before, what was once a part of a cabin and even a toilet in the woods which, by the looks of it, still is in use today!

There wasn’t a lot of fishing done at this point. Finally once we had the camp all set up Rowan wanted to take out his kayak (the Tetra 10 was his by this point) and go fishing.    Fynn stuck on land searching the island for more surprises while Rowan and I went out to see what he could do. I baited a hook for Rowan, gave him the rod, and in 2 casts he had himself is first fish solo in a kayak!  I didn’t even have time to get out the camera to get it on video!

The next day we slept in, took our time making breakfast, went swimming…etc.  Eventually we got around to packing up the camp, and stowed everything away on shore where it couldn’t be seen and went out exploring and fishing in kayak.   The boys put in at a few spots to look around for trails or surprises and I managed to catch 1 smallmouth while keeping an eye on them.   Then it was back to pick up all our gear and load down the kayaks and paddle back to the Jeep. 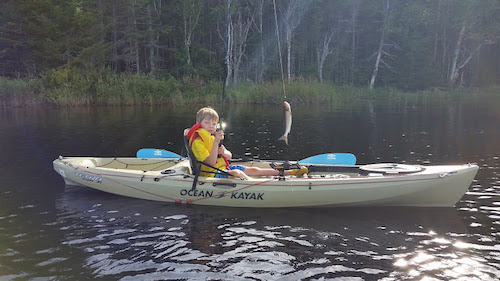 All in all it was a wonderful weekend where the boys got to be boys and have a great time together.   Next year we hope to do it all again, perhaps with a few more families this time!