Nothing is more exciting than sight casting to an unsuspecting fish—just hope the fish doesn’t see you first. Fish have four visual pigments that allow them to see more colors than humans can see. They also have better visual detection of motion and contrast. This has inspired anglers to cook up ways to hide from the fish.

Water absorbs light and color; the deeper the water the less light and color that enter the fish’s eyes. At depth, all color is lost and the fish only see grey. However, at the surface, the fish can detect a wide range of colors into the ultraviolet range. As a fish enters shallow water, it is already on the lookout for death from above. Largemouth bass, for example, can see in every direction except directly below and directly behind.

Not only can fish detect the slightest twitch, but they have excellent contrast perception. Every angler knows fish hunt for prey that stands out against the background, that’s why you use a dark lure in dark water.

So clothing and tackle manufacturers have responded with products that hide anglers and their intentions. Braided line pioneers at Spiderwire, with the help of fishologist Dr. Keith A. Jones, developed Stealth Blue’s camouflage fishing line. The line’s color pattern changes from darker to lighter blues to blend into the background.

One of the most innovative incarnations of this trend is Columbia‘s Solar Camo Shirt. The camouflage pattern is heat activated. As the shirt gets hot, white clouds appear on the blue background. Not only does this blend in with the sky, but it breaks up the angler’s profile. Krsytl Tonkin, Columbia’s marketing manager, explains that the idea came to them when they learned that blue herons catch more fish than white ones.

“Scientists figure the blue color blends in with the sky, staying out of sight of sharp-eyed fish,” she says.

Some anglers swear a camouflage kayak hides them from fish. Jackson pro Drew Gregory explains that a camouflage boat blends in with foliage and riverbank to disappear from the fish.

“A camo boat like the Cuda LT gives me more confidence,” he says, “I take advantage of the stealth factor.”

This article was first published in Kayak Angler Issue 27. Subscribe to Kayak Angler‘s print and digital editions here, or browse the archives here.

Blend in with the background to sneak up on spooky fish. | Photo: Dustin Doskocil 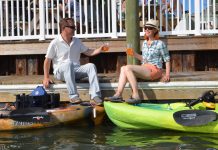 Performance Fishing Clothes That Look Good On And Off The Water 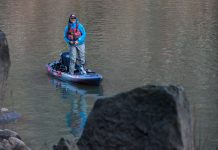 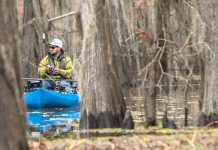 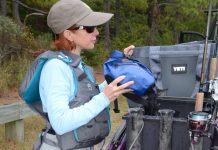